Anzac Day is one of New Zealand’s most important days of the year. It’s a national occasion that marks the anniversary of New Zealand’s initial and most predominant military involvement in the First World War.  April 25th is a day for the nation to remember and honour the men and women that fought in the First World War.  Since this day was officially declared Anzac Day in 1916, it has left a powerful legacy and has become an integral part of the nation that shapes the views of the past, presence and future.

The Flanders poppy is one of the most predominant and symbolic visuals that signify respect and remembrance on Anzac Day. The Flanders poppy is a flower that’s meaning and symbolic representation has been dramatically shaped by the First World War. English literature of the early nineteenth century denoted poppies as a symbol of oblivion or sleep due to its sedative effect on people. However, during the war red poppies were among the first plants to bloom in the battle fields. The soldiers began to associate the red colour of the poppies with the blood shed across the battle fields from their fallen comrades. Due to this, the Flanders poppy now carries a strong and powerful symbolic connotation with the sacrifice of shed blood during the First World War. To learn more about Anzac Day visit the newzealand.com website.

Below is a great craft activity that you can do with your children to honour the Anzac’s. It’s a great way to teach your kids about the history of New Zealand and their involvement in the First World War.

Steps Step 1: Draw three different size flower shapes on a piece of paper (one small and two large). These will be used as stencils.

Step 2: Place the stencils on the red felt and push a pin through both pieces to secure them in place.

Step 4: Take the pin out from both pieces.

Step 6: Repeat this process with the small flower piece on top.

Step 7: Place a small dollop of glue on the back of the black button and place that on top and in the centre of the flower arrangement.

Step 8: Draw two leaf shapes on your paper and cut them out (small and large).

Step 9: Pin the paper leaf shapes to the green felt and then cut them out.

Step 10: Turn over your poppy flower piece and place two small dollops of glue on the back. Firmly press the felt leaves onto the back. 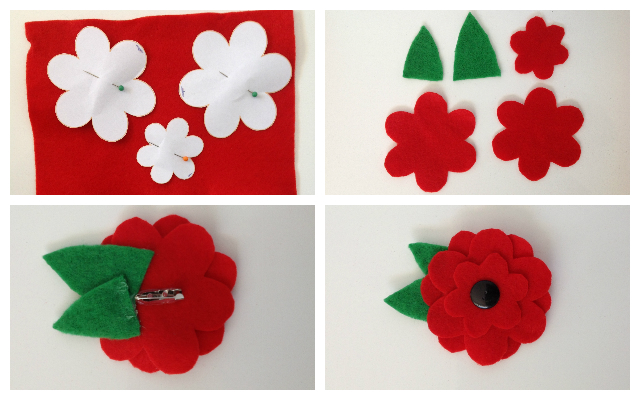