...
It’s not every year that New Zealand gets a very special visit from the royal family and what a visit it was! The Duke and Duchess of Cambridge and Prince George started their journey with a welcoming ceremony at Government House. They  then took Prince George to a play date with selected New Zealand parents and their babies from the Plunket nurse and parents' group. The Duke and Duchess then travelled to Blenheim on Thursday to lay a wreath at the war memorial before they visited the Omaka Aviation Heritage Centre hosted by Sir Peter Jackson. Friday saw a competitive side to the royal couple where The Duke had met his match when The Duchess won a harbour yacht race on two former America’s Cup yachts.  Saturday saw the royal couple in Hamilton in the morning where The Duke paid a visit to the Pacific Aerospace and The Duchess visited Rainbow Place at the Children’s Hospital. They were then off to Cambridge in the afternoon where they were greeted by some of New Zealand’s favourite Athletes to officially open the new Avantidrome - National Cycling Centre. It was then off to Dunedin where they attended a service at The Octagon. They then moved on to visit Forsyth Barr Stadium where they were met by some team members from the All Blacks. The Duke and Duchess joined the coaching teams giving their teams a pep talk before the finals alongside All Blacks stars Richie McCaw and Aaron Smith. The Duke and Duchess moved onto the next leg of their journey where they were flown to Queenstown and were taken on a tour of Amisfield Winery in Queenstown before being taken on a Shotover Jet down the Otago River. The tour then took the royal couple back to Christchurch where they paid their respects to the 185 victims, the victims’ families and the survivors of the 2011 earth quake at the Canterbury Television Memorial Park. They then met the young cricketers ahead of the 2015 Cricket World Cup where The Duke and Duchess showcased their cricket skills to the public. The final day of the royals' visit was spent in Wellington where they visited the Royal New Zealand police college officially opened by Prince Charles just over 30 years ago. It was there where they paid their respects to the 29 Officers that have been killed in the course of their duties. Mocka have enjoyed having the royals visit New Zealand and have put together a collection of their British themed products in their honour.  It has been an eventful time for New Zealand and for the royals. Mocka wishes The Duke and Duchess of Cambridge and Prince George a fun and safe tour of Australia. Featured products: Union Jack Teepee, Teepee Bag and Teepee Cushion, and Union Jack Nutty Helmet. 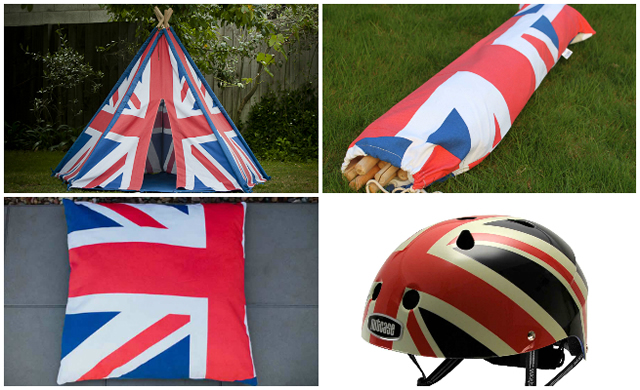